Today I was thrilled to receive ten copies of a small bilingual book of two short stories, Life Sentence and The Blue Cross, my translations of Condamné à perpétuité and La Croix bleue by the New Caledonian author, Claudine Jacques. 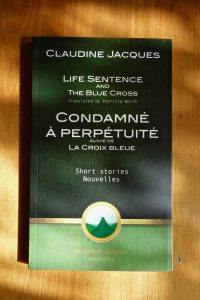 Life Sentence was published last year in Southerly Journal (Sydney University), and now it’s available in this little edition from Volkeno Books, Vanuatu. This is the second bilingual book published by Volkeno that includes Jacques’ original and my translation. The first was Le Masque / The Mask.  Both The Mask and the new book are available to purchase from Les Éditions noir au blanc.

Life Sentence is concerned with leprosy, once an incurable disease among poorer New Caledonians. The Blue Cross tells the story of a wife dealing with an alcoholic husband. Both stories end with hope.

My translation of Claudine Jacques’ Condamné à perpétuité, “Life Sentence”, has today been published by Southerly, the journal of the English Association at Sydney University. The journal is available to purchase in print or digitally.

Southerly is dedicated to publishing new Australian literature. I feel honoured to have had my work selected, given that the author I’ve translated lives in New Caledonia, a French island about two hours off the coast of Queensland. However, I’m Australian and the English is mine. The story has much in it that was familiar to me as a child in Queensland: tropical flora, heat, ocean. But one thing I’m not familiar with is leprosy, the topic. There’s a little island clearly visible from Brisbane called Peel Island, which in the past when anyone asked was always quickly identified as the leper colony. The question was a good conversation killer. All we knew was that those who lived there had been expelled from the mainland. No one actually knew what it was like to be there.

Reading Condamné à perpétuité gave me a bit of an insight into life on an Island of Lepers.

To encourage you to read the translation, I’ll reveal that “Life Sentence” has a happy(ish) ending.

I feel especially fortunate that Southerly has published it since the theme of their current issue is Persian literature! “Life Sentence” is one of the few stories included that are outside the theme. Thank you Southerly.

(Be assured this is the latest issue despite the 2016 date.)