For a couple of months I’ve been waiting for a journal posted in August, and yesterday it arrived in my letterbox:  Eleven Eleven, Issue 19, a Journal of Literature and Art produced by the California College of the Arts.  I was surprised at the size of it, about half an inch thick, 256 pages of stories and poetry and art, some in colour.

The editors had published two stories I translated from a collection by Jean Lorrain:  ‘Princess Mandosiane’ and ‘Queen Maritorne’, and sent me a copy by way of payment.  Seeing the stories in the journal was pretty special, and knowing that readers will have to go out and buy it gives the experience an edge.

But even being published in a free online magazine earlier this year was, I have to admit, a thrill!  Another one of Jean Lorrain’s stories, ‘Madame Gorgibus’, was published in Intranslation, part of The Brooklyn Rail, ‘an independent forum for arts, culture, and politics throughout New York City and beyond’.  I was so glad to read that last word, my home being far far away from New York.  Indeed, I’m very grateful to American magazines that welcome submissions from Australia, from the back of beyond (well not quite), since there are virtually no journals here that would take my translations.

What opportunities there are for writers in this electronic world! 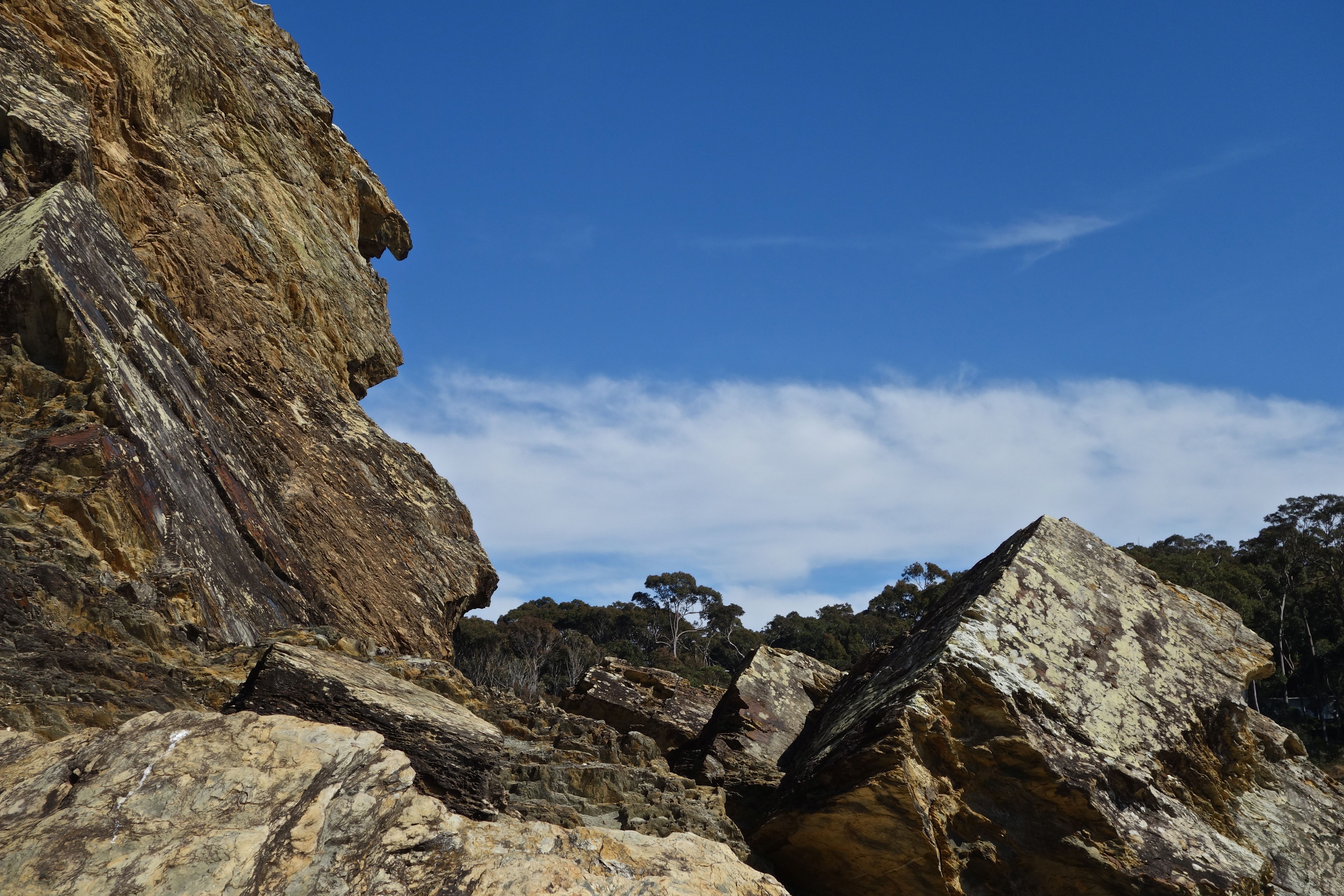 Yesterday I read two writing prompts that gave me ideas.  The first one was the Daily Post’s prompt, Handwritten, and the second was in the ebook, 365 writing prompts, where the prompt for 11th September is Thank you.  The task is defined:

“The internet is full of rants. Help tip the balance: today, simply be thankful for something (or someone).”

It was funny they should say that about the internet and rants, because I was grazed by this combination today.  I was feeling thankful for something that happened because of the internet:  a nomination for a literary prize by the editor of Eleven Eleven literary journal.  Last month the journal published my translation of Jean Lorrain’s Princess Mandosiane.  Knowing little about prizes, I made what was perhaps a mistake and searched for online information.  Within seconds I was reading a rant about the meaninglessness of nominations, the unlikelihood of winning a prize, the embarrassment of being one of tens of thousands of nominees.  Don’t put it in your bio, pleads the ranter, don’t put it in your résumé.

One moment I was thankful, the next I was fizzing.  It took literally seconds for an internet rant to douse my small flame of pleasure.

Today I’m simply thankful for Eleven Eleven journal and for the editor’s opinion of my work.

To illustrate my little achievement, here’s a photo I took at the beach this morning when I saw this rocky man laughing up at the sky.  Ha ha ha, you ranters!  A nomination is a reason to be cheerful. 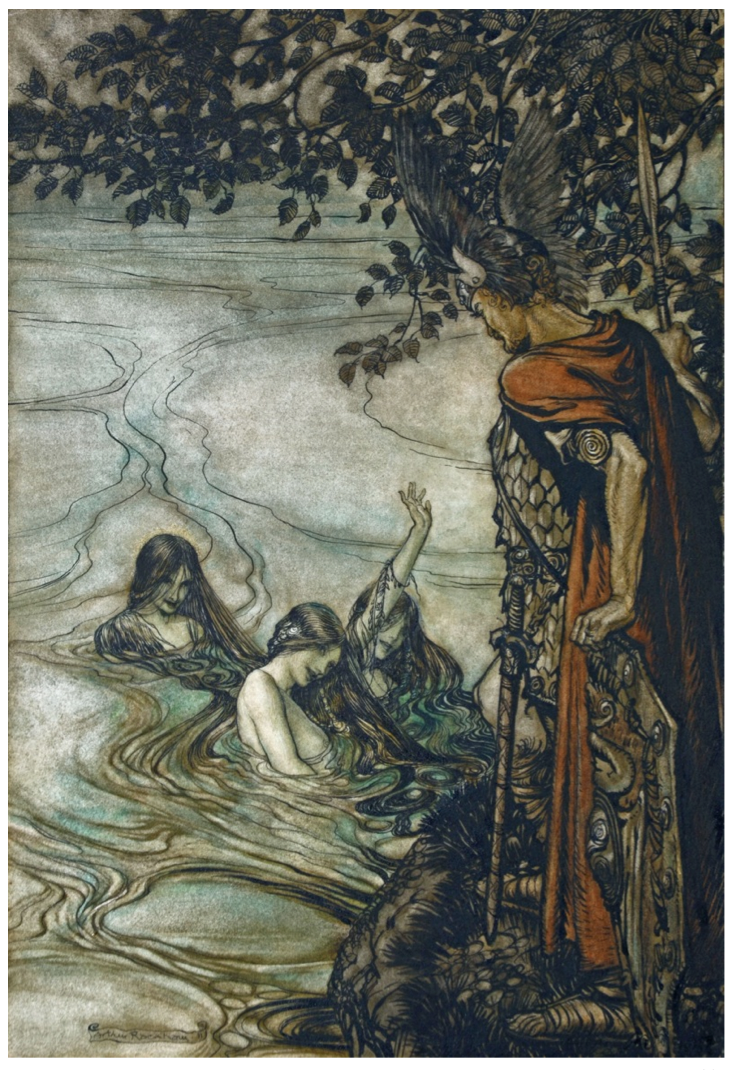 This is an account of connections observed when a translator, or any writer, is absorbed in a story.

This morning as I searched through a Wikipedia entry about One Thousand and One Nights for the use of a particular phrase, I came across the sub-heading ‘Foreshadowing’, which, I learned, is a literary device used by an author to hint at certain plot developments such as a disastrous end for the hero.  Ah, what a coincidence, I thought, having just posted a blog entry in response to the WordPress weekly photo challenge for which the prompt was foreshadow.  Clicking on the highlighted term ‘foreshadowing’ on the Wikipedia page took me to another page where I saw an illustration by Arthur Rackham of the Rhine maidens warning Siegfried of a curse and looming disaster.

Ah, I thought again, what a coincidence!  Just a few days ago, reading up on the Symbolism of artists and writers of the 1890s, all the better to understand the story I was translating that day, I came across a painting in a large book about nineteenth-century art, a work by Albert Pinkham Ryder called Siegfried and the Rhine Maidens.  It surprised me at the time because it virtually depicts a particular detail in the story I was working on, Useless Virtue (L’Inutile Vertu) by Jean Lorrain (1895).  Yet another coincidence.  Here’s the painting from Wikimedia Commons:

The scene with Siegfried and the maidens comes from Wagner’s opera, Götterdämmerung (Twilight of the Gods), which inspired many painters and writers of the 1890s who produced stories and paintings that transport the reader or viewer, as Wagner did, to a mystical land where symbols foreshadow an unhappy destiny for the hero.  There is often a sunless sky or a glowing moon, a mythical natural landscape of forests, mists, bodies of water, and nymphs – often in groups – who seductively invite the hero to join them.

In a few paragraphs from Useless Virtue, Jean Lorrain could have been writing about Wagner’s Rhine maidens.  The hero, Bertram, even wears a winged helmet like Siegfried in the paintings above.  The story is a gloomy one and quite different from Götterdämmerung, but there’s a moral at the end:  there is punishment for a man who avoids temptation all his life!  I enjoyed translating the vivid imagery, partly because this week I’ve stumbled across these few connections to the story.  Vive la coïncidence!

Queen Maritorne was the terror of greedy thieving children: she reigned from the attic, where lines of pears and apples ripened, to the vat from which the wine was drawn; she was also the punishment for drunks, and without warning would leap out from the cask tapped by the dishonest valet.

This is the opener of a fairy tale I translated in France.  I felt like I’d met her before, this queen who punishes overeaters and overdrinkers.

These are tales for the ill, tales for the heavy air of bedrooms with herbal teas and hot infusions, tales to be told between six and seven, the hour when fever increases, when Norine was invited to come and dreamily tell stories at our much-loved childhood bedside.

Thus begins a set of French fairy tales I’m translating.  The next lines after the opener gave me cause to reflect yesterday on Macbeth’s witches and their cauldron:

“Into the bedroom of deepening shadows she would tiptoe, slipping in without a sound, sitting down at the head of our little bed, and in her toneless voice would begin:

Three white cats, with ribbons on their necks, dance around the cauldron.”