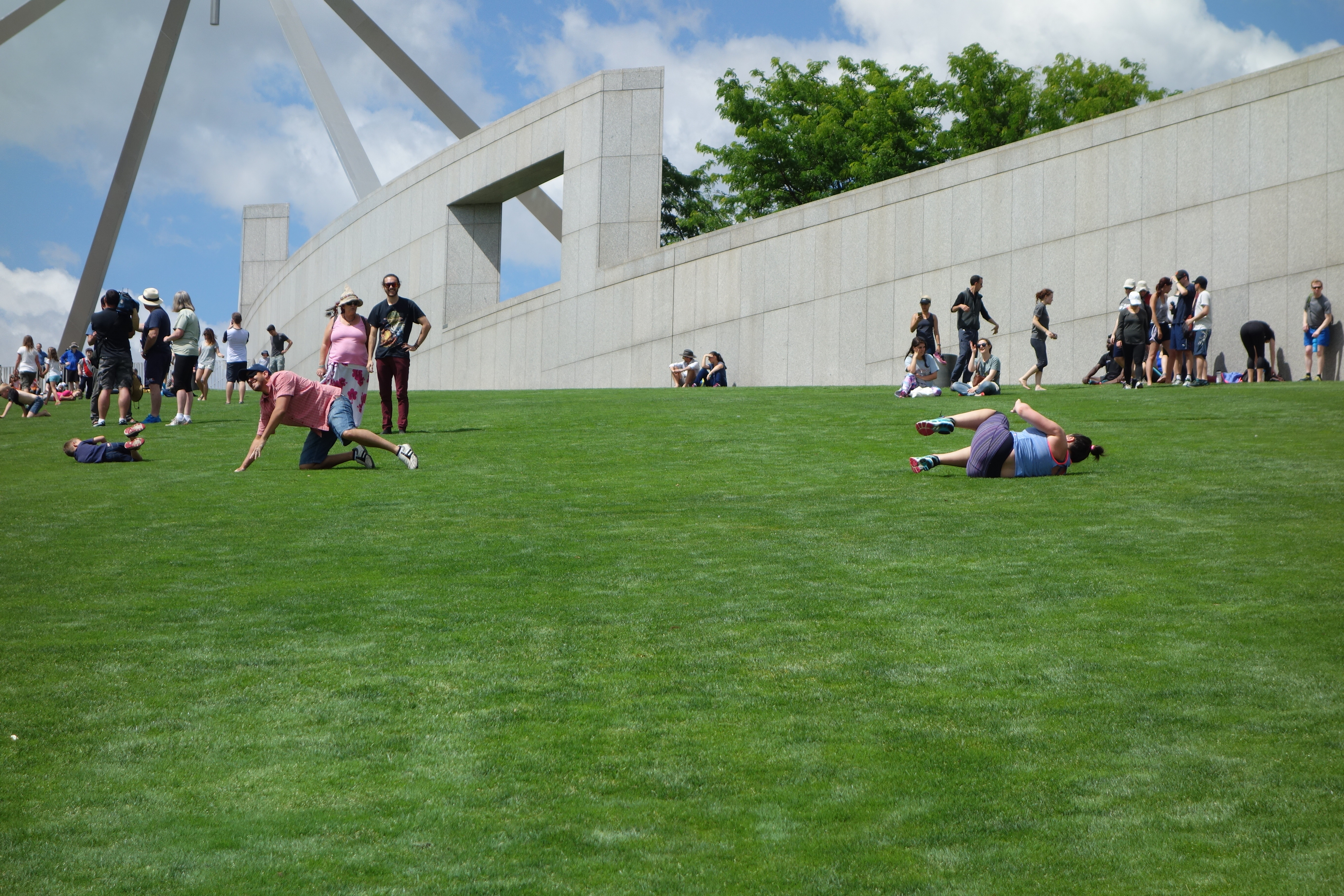 In anticipation of a 2.6 metre fence to be built in front of Parliament House in Canberra, Lester Yao, a young architect, came up with a plan during the week to invite everyone to roll en masse down one of the grassy roof slopes.

Since the building opened in 1988, adults and children have enjoyed rolling down the slope or even jogging or training on it, and indeed this was part of the inbuilt anticipated pleasure designed by the architect Romaldo Giurgola (who died in May this year). When the security fence goes up in the new year, the public will no longer have such free access as we do today.

Lester Yao put out a call on social media last Monday, and in response hundreds of people turned up for the peaceful rolling protest. We drove towards Parliament House and saw all the people on the grass from the approach road, so we parked, went to have a look and discovered that a few minutes earlier, on a signal, they had all rolled down from the top. Even though it rained yesterday, all day, as well as the day before, this morning was dry and the temperature was up and no one was complaining about their damp grass-stained clothes. As the rollers began to disperse, much of the space was cleared, which suited individuals who wanted to do their own thing without getting crushed.

There are many ways to roll down a hill. Most lay across the slope and propelled themselves over and over like a log. But a few creative ones did somersaults  until they were giddy. The woman below did headstand rolls.

Parents rolled holding a child, dog-owners rolled with their dogs, and people rolled with rolling cameras. Quite a few adults simply played by themselves like children, rolling on their own for the sheer silliness of it.

In the photo below, there’s a guy laughing at the two rollers in front of him. It looked like such fun…

…that he couldn’t resist. He just had to see what it felt like.

(Just in case you’re wondering, I didn’t roll down the hill.)

Romaldo Giurgola had designed the building with a roof that could be accessed by the public in a spirit of democracy. He liked the idea that we could walk over the top of those in charge of us. But that is all about to change.

Thanks to the WordPress photo challenge for the Anticipation prompt.