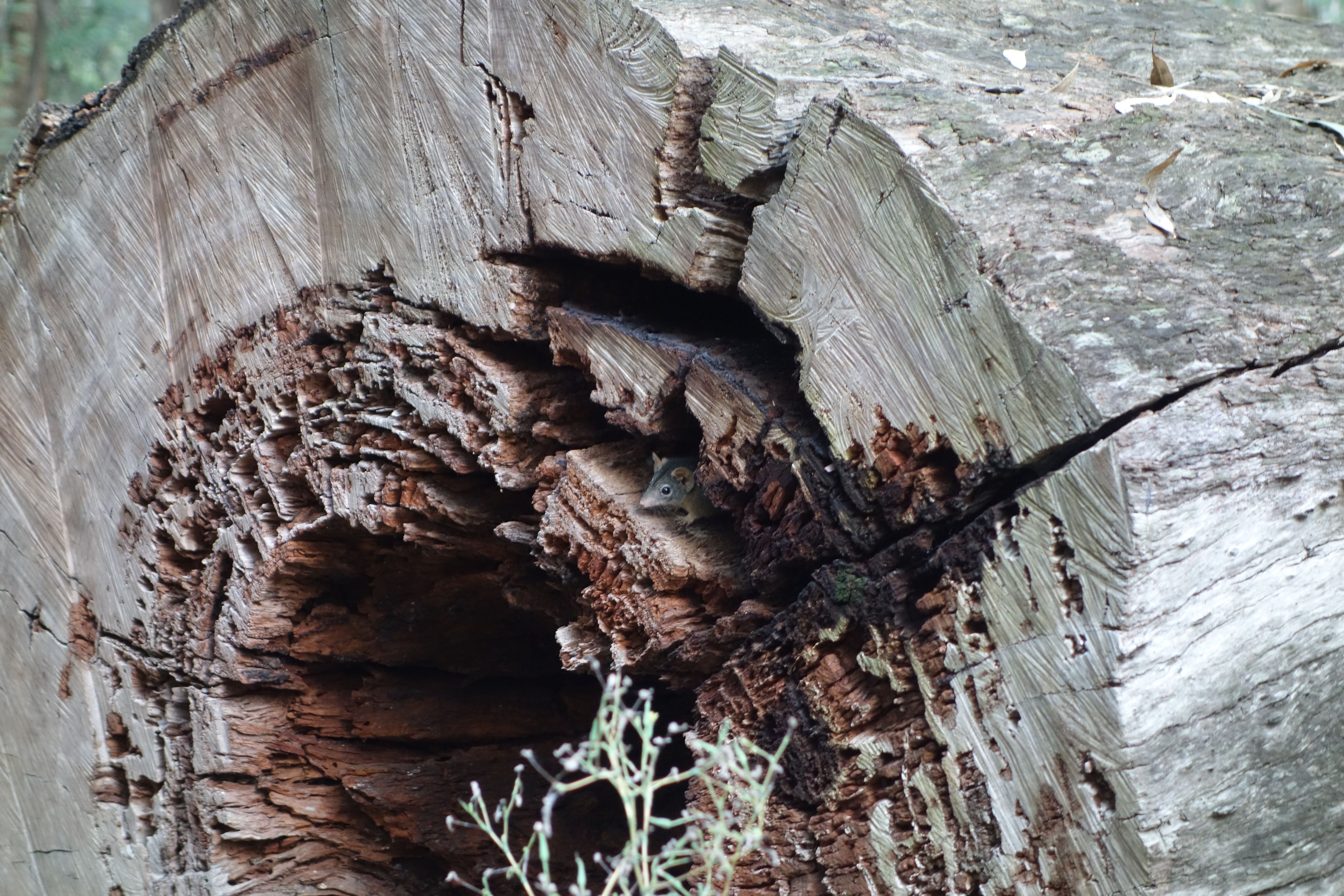 This month I visited Wangaratta in Victoria.  The town’s name comes from two aboriginal words meaning ‘resting place of the cormorants’.  I’ve been here many times before but this time I saw a forest and an unfinished cathedral I never knew about.

As I entered the forest I was faced with a fork.  I took the left prong.

It led to two beaches, or rather sandy strips on the edge of the Ovens River.  In the late afternoon, the view was a series of horizontal panels.

Many trees fallen on the forest floor have been sawn into pieces, making perfect hideaways for small creatures hiding from numerous unleashed dogs being taken for their daily walk.  This tiny mouselike marsupial sneaked in and out of the layers of timber as I crept closer with my camera. Can you see him?  I think he’s called antechinus, one of our native fauna.  But I’m no expert.

These photos make the forest look a dull green-grey place, but there was the odd orange fungus to break the monotones.

On the way back from the forest I passed a stunning cathedral made from large granite blocks quarried from the nearby Warby Ranges.  Unfortunately, even a truly beautiful object has at least one flaw, and a closer look at the church revealed its imperfection.  The bell tower was never added when the rest of the building was being constructed, though there was every good intention to finish the structure.  The original granite quarry has now been turned into a park, but the granite could be obtained from elsewhere if a million dollars were provided. That’s the estimated cost.  Anyone out there with a lazy million, looking for a project?  In the meantime the bells hang and ring in this timber and steel tower that looks like it’s just landed.

There are nine bells in all.  At the top is an Angelus bell, and half-way down hang eight magnificent bells which were cast in Gloucester, England, in 1806 to celebrate Nelson’s victory in the Battle of Trafalgar.  For 171 years they hung in St George’s church in Bolton, Lancashire, until the church became redundant.  They were purchased with Wangaratta cathedral funds and brought to Australia, after which the present curious tower was built in 1983.  These bells are the oldest full peal in Australia, rung by a team of bell ringers on Sunday mornings and for special occasions.

Taking one trip EVERY month is the idea of Marianne from East of Málaga in Spain.  Not that I need to be told to go places – getting out of the house and even out of town once a month is not something I need an excuse for.  But, thanks Marianne for prompting me to write about some of the things I see along the way.  And thanks for your last trip post here.

8 Replies to “One trip EVERY month: April”