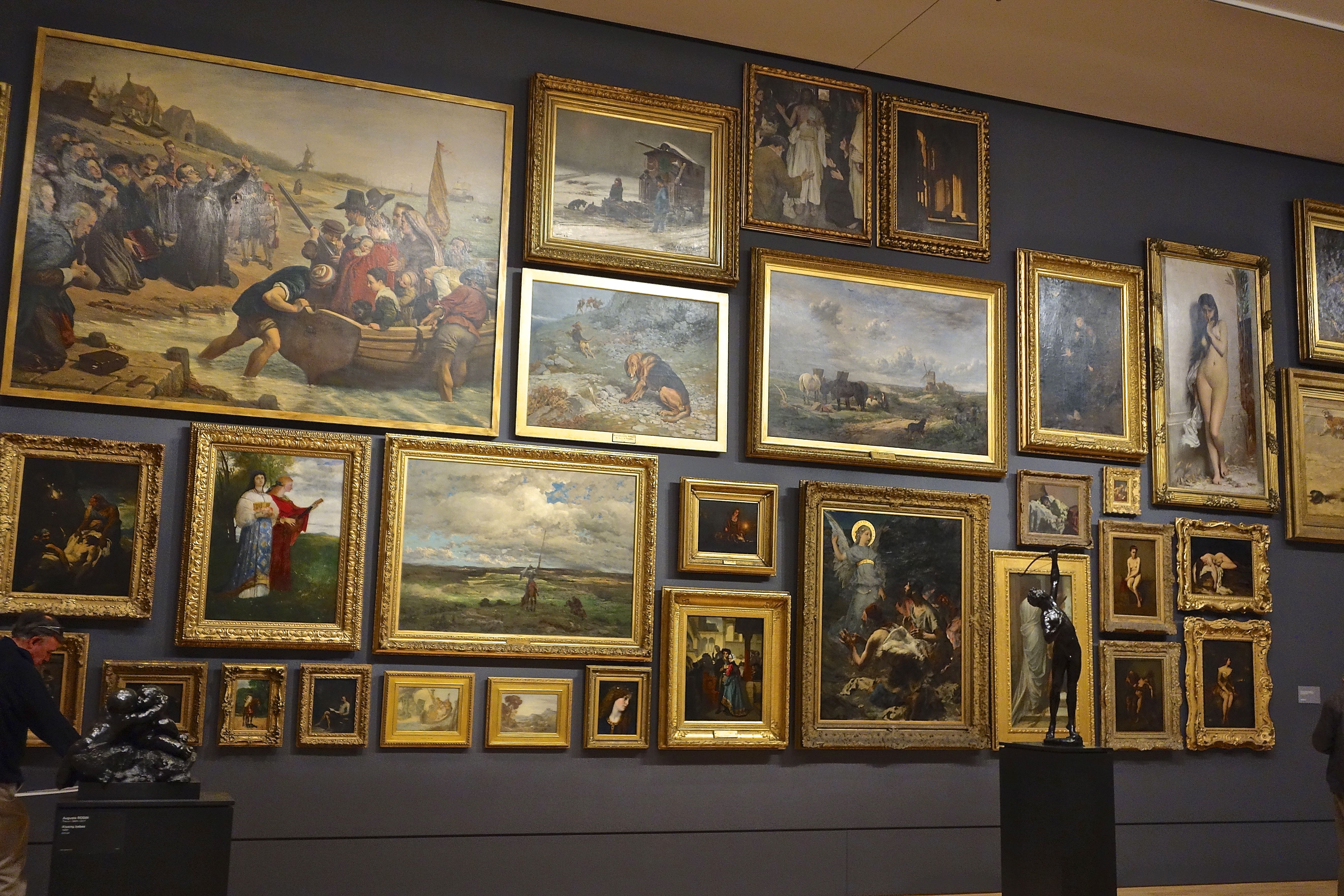 Marianne at East of Málaga says:  take a photo of something (interesting), turn round, take a photo of what’s behind.  In the National Gallery of Victoria there’s a room where 96 nineteenth-century paintings hang as they would have in that century in the Paris Salon or London’s Royal Academy: covering the walls, tightly packed above and beside one another.  In the hierarchy of hanging, the curator’s preferences were hung at eye level;  the least favoured were hung right up the top where they’re very hard to see.  In this NGV display there were different priorities, with wide skies placed at the top and small detailed paintings low down and easier to study.  In centuries past, none of the paintings were labelled or attributed to any artist.  However, for the NGV’s visitors the information is available near the seats in the centre of the room, which is where you have to stand to see the top row of paintings.  As I stood trying to look at and enjoy every single piece, I took a general photo of one wall, turned round and took a photo of the opposite wall. 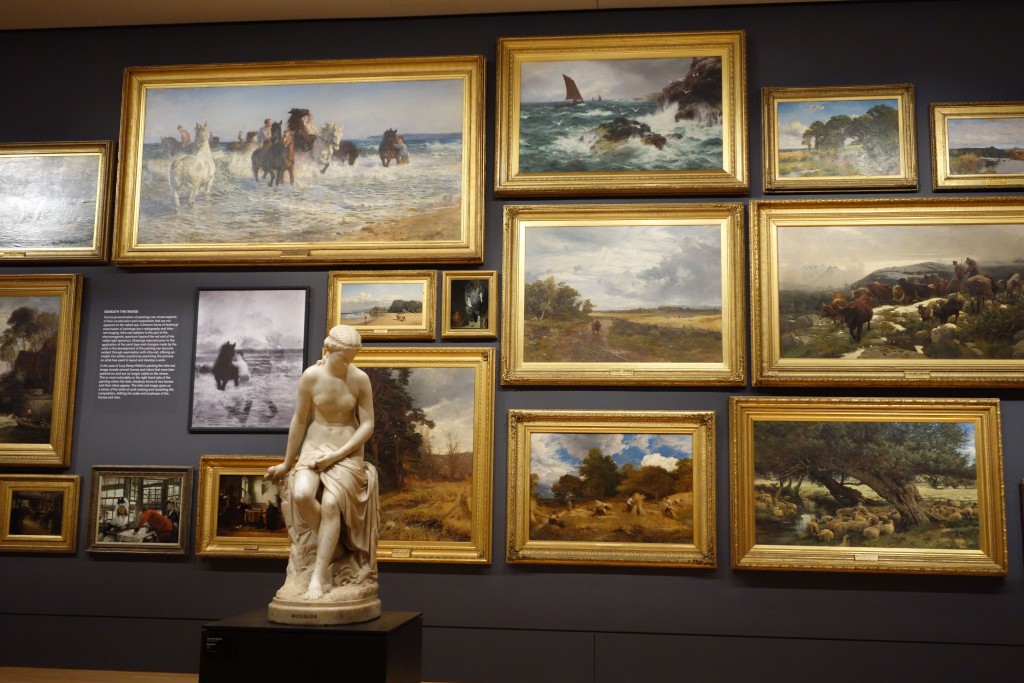 My favourite on this side of the room, at the bottom left of the photo, beneath the writing on the wall, is An Interesting Story by James Tissot.  The two women are not really listening to this man and his ‘interesting’ shipping tale.

On the opposite wall I was taken by the nude at the top right of the photo, La Cigale (The Cicada or The Grasshopper) by Jules Lefebvre.  It’s a representation of the cicada from La Fontaine’s poem, La cigale et la fourmi (The cicada and the ant), in which the cicada sings all summer while the ant busily stores up supplies for the winter. The subject in this painting is standing naked in the wind while autumn leaves blow about her.  When the painting was exhibited in the 1872 Paris Salon it was accompanied by a line from La Fontaine’s poem:  Quand la bise fut venue (When the cold north wind blew). I felt a kind of pity for this woman in her lack of foresight. 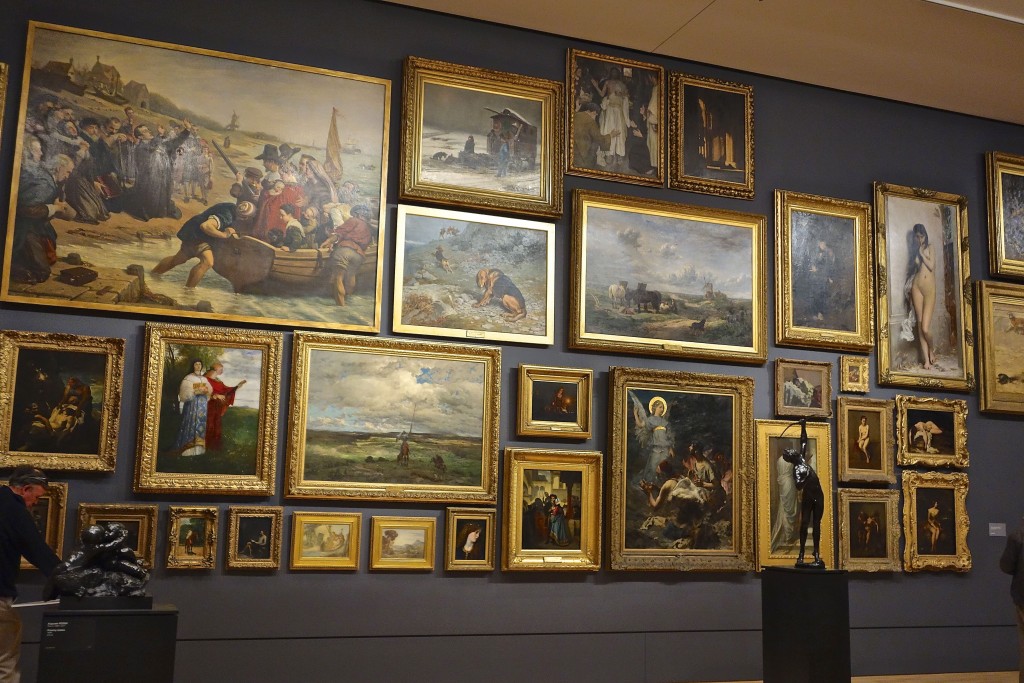 I found an amazing blog about James Tissot while I was reading up about my favourite works from this room:  Lucy Paquette on The Hammock.  There you’ll find a large number of Tissot’s paintings, all of them brilliant.  Check it out.

19 Replies to “Looking forward, looking back”