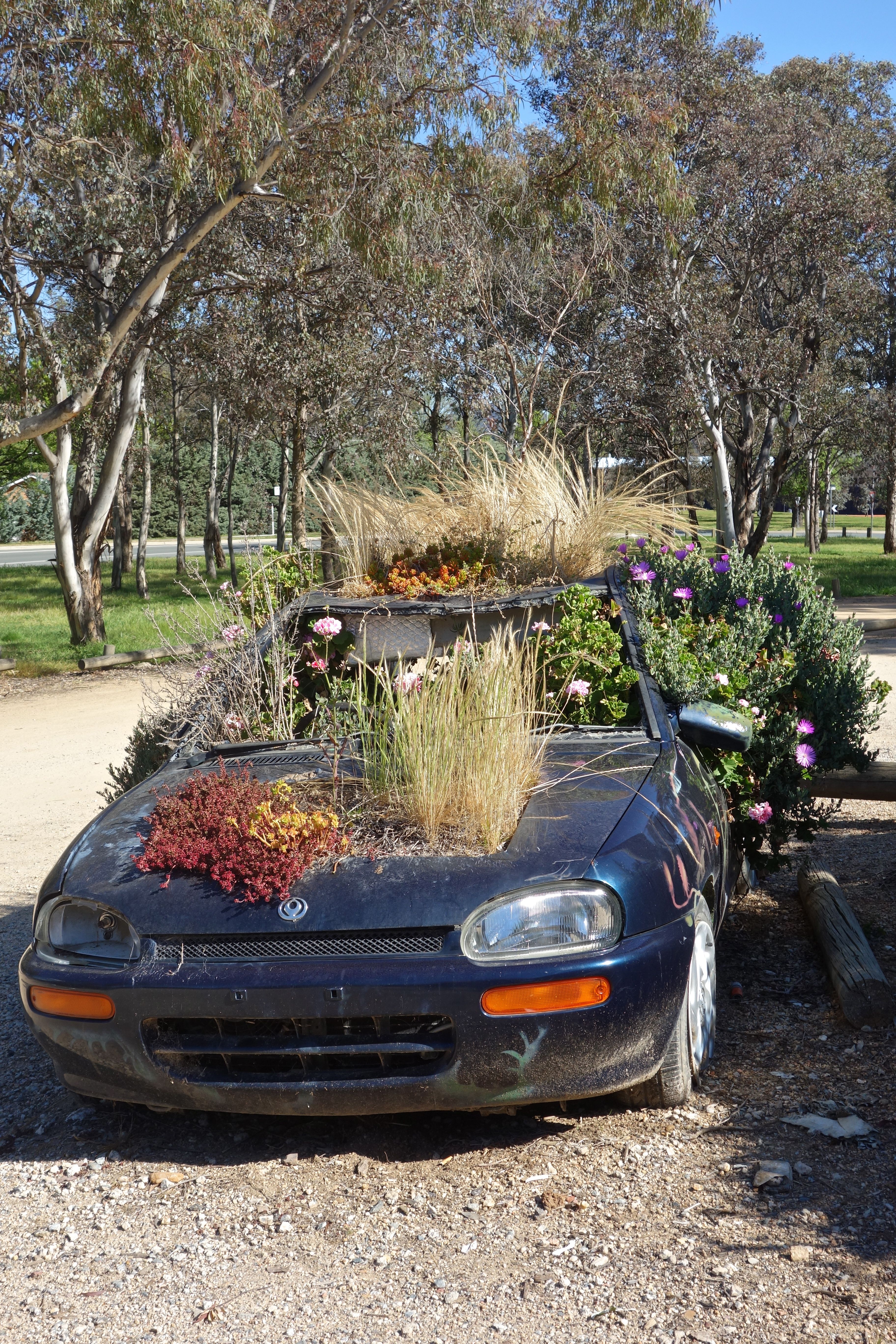 Some months, rather than leave town, I go tripping around my local area and have just as good a time as if I’d taken a trip to the sea.  This weekend, just by walking and riding my bike around the suburbs and by the lake, I’ve seen a few odd things that make me appreciate this beautiful unboring city.  Yesterday, for example, I knocked on this door.  Clearly the resident is not afraid of anyone:

Then I went to the lake to watch the weekend sailors.  Let me give you a bit of the history of this central ornament of the nation’s capital, in honour of its 50th anniversary this week.  Lake Burley Griffin is an artificial lake formed by damming the Molonglo River.  The capital’s designer, the American architect Walter Burley Griffin, is immortalised in the name of the lake.  He had included it in his original design in 1912, but the lake project didn’t begin until 1963, and finally the formal opening came in 1964.  Residents and visitors have flocked to its shores ever since.

For me, it’s a body of water which is neat, if unnatural;  it invites us to sit beside it but not to enter it.  The water quality is frequently reported as unsuitable for swimming, and therein lies the disappointment.  But I must remember that the Molonglo River is narrow and unspectacular, hardly a suitable river for a nation’s capital, unlike the Brisbane River in Brisbane or Sydney Harbour in Sydney.  Here’s a photo taken earlier this year as I was walking beside the part of the Molonglo which still exists where the lake ends (begins?);  you can see it opening up into the lake on the right:

Thanks to Walter Burley Griffin, instead of a stream that even I could swim across, we have a nice big lake.  Yesterday I went to watch sailboats sail on it, an excellent antidote to the busyness of life.  The weather was heavenly, an ideal spring day;  blue sky, warm air, light breeze.  If you were fishing, which I wasn’t, there was no need to hold on tight to the rod.  No need to hold it at all, in fact:

Many of the national institutions are situated lakeside, including the Australian National University.  One of the university’s sculptures by the water caught my eye with its aluminium birds roosting on the dead branches of this old gum tree.  From a distance they give the impression of a flapping flock of sulphur-crested cockatoos, a familiar sight around here.  But a closer look reveals the metal birds also resemble hands reaching up to the sky.  The commissioned sculpture, called Witness, is by Indonesian artist, Dadang Christanto.

After seeing unreal birds in a dead tree, I turned round and saw real plants in a dead car.  Another piece of ANU ‘art’.

Back in my suburb, I was riding my bike past a neighbouring house where a sheep is both pet and mower.  She was very happy for me to take her photo but didn’t understand the concept of standing back from the lens.

Check out the reflection of me in her eye!  Now that’s odd.

All in all, a good spring weekend tripping around my town.

Marianne sends out the challenge to take one trip EVERY month.  If you’re reading this, Marianne, I say a big THANKS for the inspiration!