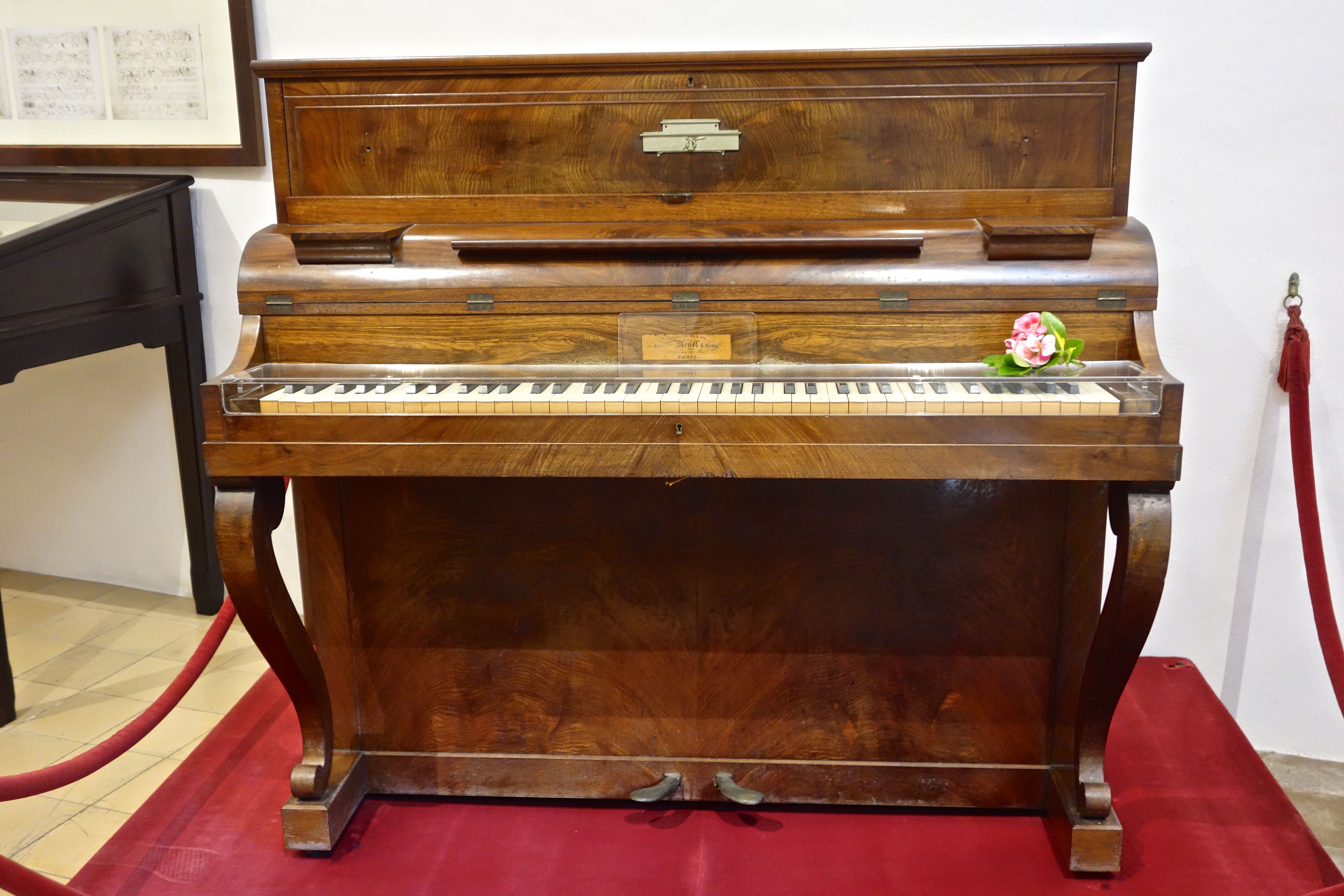 Today in Valldemossa, Mallorca, I heard two Chopin piano concerts, each lasting ten minutes.  They were included with the ticket to the Real Cartuja Municipal Museum which exhibits Frédéric Chopin and George Sand memorabilia in a few cells of the old monastery.  Though one of Chopin’s pianos is present in another cell, the Celda de Chopin (a different, privately owned museum), it was not played today;  the pianist played on a grand piano in the adjoining Palace of King Sancho, who owned the monastery before it was a monastery.

The Chopin pieces give visitors an impression of the sounds that drifted from the monks’ cells where he was staying in the winter of 1838/39.  Though he began his sojourn by composing on a borrowed instrument, in the last few weeks of his stay his new Pleyel piano arrived from Paris.  In the cold bare cells he composed a few Preludes, a Polonaise, a Ballade, a Scherzo – pieces now famous. Today’s tourists come to see this very piano in the private museum, they photograph it and even hear it played by concert pianists, but only in summer.  I missed out, being here in spring.

They photograph his handwritten musical scores, his death mask, his hand mask.  There’s little information attached to the exhibits, and if visitors can’t speak to the guide in Spanish, they can only look but not learn. Yet if Chopin’s name is famous here, it is a modern phenomenon;  when he and his lover, George Sand, were staying in Valldemossa, they were anything but popular, he having a disease which in the Mallorcan mind was contagious and deadly, and she wearing men’s clothes and not attending mass on Sunday.  Even two years later when she wrote her account of their stay, Un Hiver à Majorque, Sand did not reveal the name of her companion but discreetly referred to him as the sick one, the invalid, our friend, someone in my family.

Time passed, and the world learnt that Chopin had been here, had composed here.  They wanted to come and feel his presence, hear the echoes of his music in the cloisters, see his music scores with all their corrections exhibited on the walls.

George’s photos and images also adorn both of the museums, samples of writings by her and about her are exhibited under glass, with no indication of who wrote what.  Copies of paintings of Sand, Chopin and their contemporaries hang on the walls.

The view from each cell is stunning, a distant perspective with a foreground of Mediterranean plantings in a monk’s garden. While Chopin composed, Sand finished Spiridion, the novel she’d begun a year earlier, coincidentally about monks in a monastery. What providence for a writer to land in her imaginary setting, to live for a short time the life of her protagonists!

Copies of Sand’s travel account, Un Hiver à Majorque, are on sale in both museums in many languages. An English translation by Shirley Kerby James, A Winter in Mallorca, sells well. Clearly tourists like to buy it and relive Sand’s experience here with Chopin, its ups and downs, mostly downs.  His health deteriorated with the winter rains, the cells were miserably furnished and bitterly cold and the local food was unpalatable to them.  If you listen to Chopin’s Prelude in D-flat major, Op. 28 no. 15, sometimes called the Raindrop prelude because of the repeating A flat which seems to imitate insistent raindrops – it’s believed he wrote it during a rainstorm – remember him at this low point in his physical health, remember that this music came from his suffering.

As for Valldemossa, I can recommend it if you like well cared-for stone houses and cobbled streets, green-shuttered windows, and if you like to be surrounded by your fellow human beings, for masses of them flock to this village to see the place that unceremoniously inspired Chopin to write beautiful music, the place where Sand observed so astutely the Mallorcans and a few monks left over from the days when the Real Cartuja was a functioning Spanish monastery.