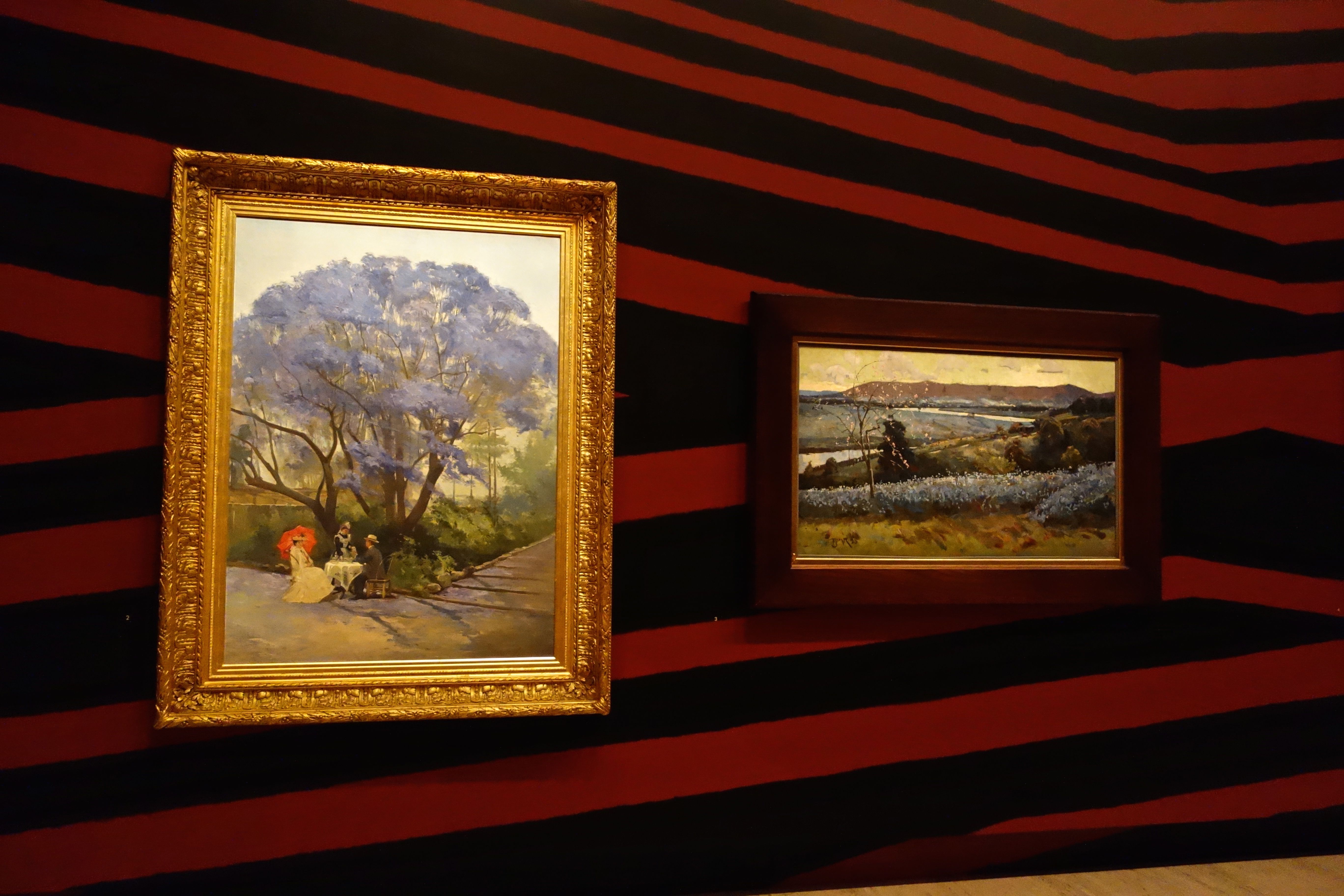 There are times when a gallery visit can be dull, and others that are unforgettable.  When I walked into this room of old Australian art, I experienced a moment of consternation as the walls leapt out from behind the turn-of-the-century artworks.  All four walls were painted in a red and black chevron pattern, clashing with the soft colours of portraits and landscapes in frames of ornate gold and timber.  The intent was to shock, and it did.  The pattern is a reference to the Wiradjuri people of Australia who paint chevrons on their skin and on trees.  The installation artist is Brook Andrew.

I was disturbed by the clash of loud and soft.  But on this Monday morning there was something even more disturbing in the room.  On one of the viewing seats was an obese boy who had fallen into a deep sleep.  His carers were trying to wake him, calling his name and shaking him.  The gallery guard came to help with a louder voice, keen to move him along.  She called for her colleague to bring an ice pack, which was laid on his shoulders and neck.  He didn’t wake.

They phoned his mother, put it on speaker, put the phone near his face, all to no effect.  The guard sent the carers off ‘to have lunch’, trying to trick him into feeling left behind.  No reaction.  He was now sliding off his chair, an ordinary chair, not a sofa, not even a soft chair.  Just a gallery chair, hip but hard.  The guards pushed him back onto it, talking to him all the while.  Nothing.  One guard said to the other, “We haven’t had this before,” and laughed as gravity pulled the boy down again.

The carers had not gone to lunch but were hiding from the boy in the next room.  They peeked round the corner and saw that he hadn’t woken.  The guards warned the sleeping boy that he would have to go home in the back of an ambulance.  His hand twitched, and the guards and carers persisted with the cold pack, calling, rubbing and tugging.

Forty minutes later:  they stood him up but his eyes were still closed.  As I left the room, relieved, they were following me out, the carers guiding him, one each side as he walked blindly.  His huge black t-shirt was too long, hanging down past his shorts, revealing only his heavy shuffling legs. They were taking him home to bed, they said.

I returned to look more closely at the artworks, to try to understand why the walls were screaming in red and black.  But I could think of nothing but the boy, who must have been heavily medicated.  Those chevrons are emblazoned in my memory, but the boy whose eyes never opened will not remember them.