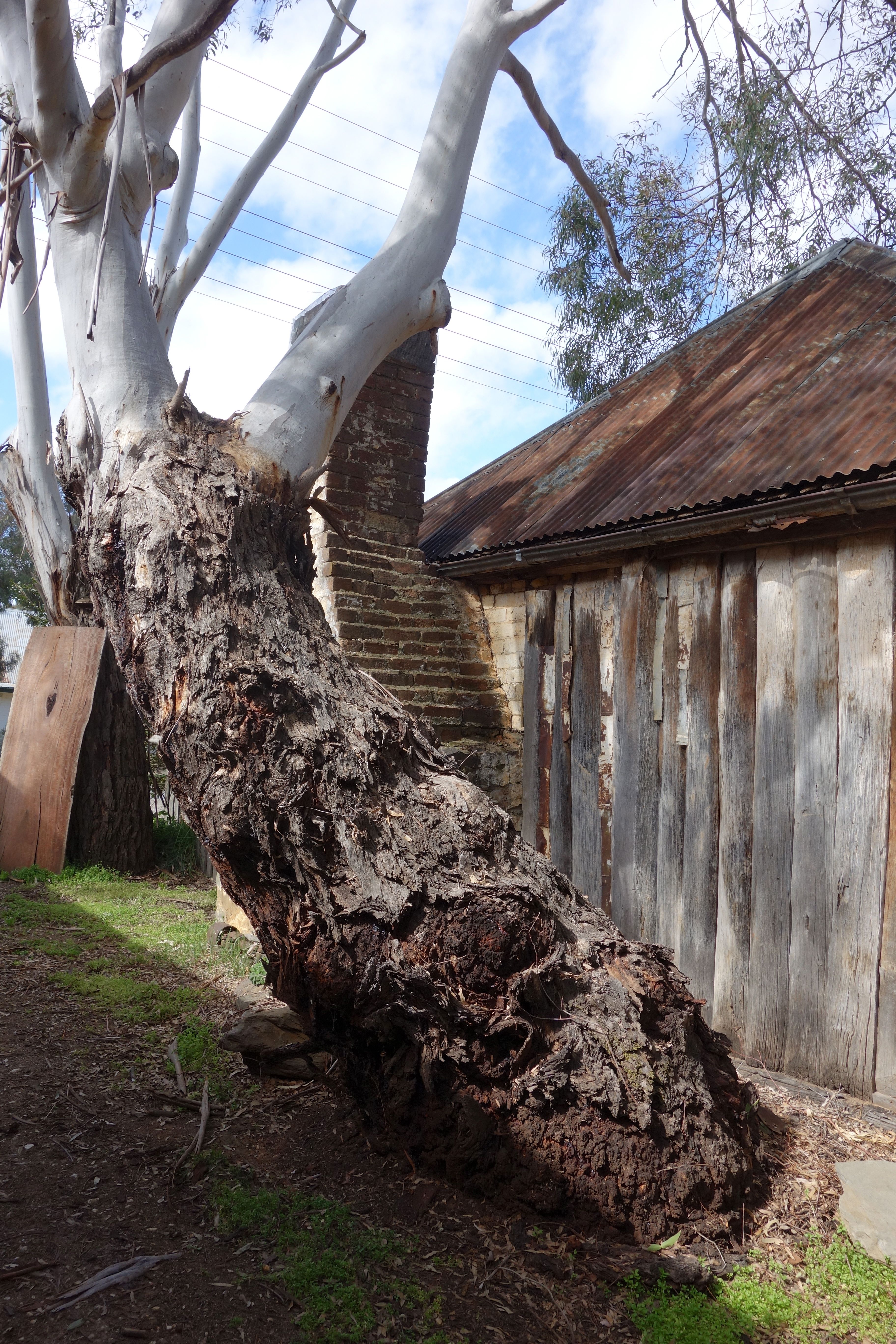 Not far out of Canberra, a small village called Gundaroo beckons some of us to stop and stroll, and others to stop and live in the peace and quiet.  This morning we drove there for a cuppa, parked in Cork Street outside the old police station, beside which there’s a tank on a tower, beneath which there was a sheep asleep.

We had morning tea at the Cork Street Café in the old stables behind the Gundaroo police station.

The chef suggested her freshly baked (in three minutes) foccacia with jam, and with our cappuccinos, it was all hot and delicious, outside in the sun, looking at the lockup.

Settlement in the Gundaroo area began in the 1820s after explorers discovered the well-watered land and fine black soil of the Yass River valley.  From 1856 the village grew slowly with a general store, a Presbyterian Church and Royal Hotel going up.  This small, small village needed a police station and lockup, sad but true, as well as a Court of Petty Sessions.  Today the Court, built in 1874, is an Anglican Church.  It’s fascinating to walk around it and work out how it’s been converted to a church, with the addition of three stained glass windows in an otherwise blank front wall, a bell in the yard to call people to worship, and a cross on the roof (only just visible in my photo).

A short skip down the street brought us to an old shop built in 1886, once called Sally Paskins’ Store, but which is now a kind of museum of old tools that can be purchased.  Together with another shop beside it, the Gundaroo Store, it would sell all kinds of necessaries, from haberdashery to hardware items, and even explosives for miners, for gold had been discovered in the region.  No one bothers with the gold these days, since Gundaroo has a pretty high average household income.  In the header of this page you can see the outside of the store with its heritage-listed wooden plank walls and brick fireplace, quietly retiring beside an ancient tree.

Though it’s a shop, the building is laid out in the typical style of small 19th-century Australian houses, with a hallway extending like a tunnel from the front door to the back.  I slipped out into the back yard while my husband was still inside looking at the blokey stuff.

A similar cottage across the street was put up as the Gundaroo Literary Institute and Library, which I once wrote about here.  As we were heading down to the Village Common, run by the villagers as a common grazing ground, we saw the sheep that had been asleep, now standing close to the fence munching grass.  We approached.  She came towards us like a lonely dog looking for a pat.  It’s been a long time since I’ve touched a sheep and I’d forgotten how thick the layer of wool is.  I had to press down through several inches of it to make any contact with the actual head.   As I stroked her, I found tiny horns curving over and hiding their tips down in the thickness of the wool.  She seemed to like the attention even if she couldn’t feel me making much contact.

With her sweet ears that stuck out horizontally, two furry white triangles with pink inners, I couldn’t resist a few clicks.  As we were walking away, she came to the gate and poked her nose through, like our dog does when we arrive home.

It was a good Gundaroo morning.

Thanks Marianne for inspiring me to take a trip EVERY month.

4 Replies to “One trip EVERY month: August”