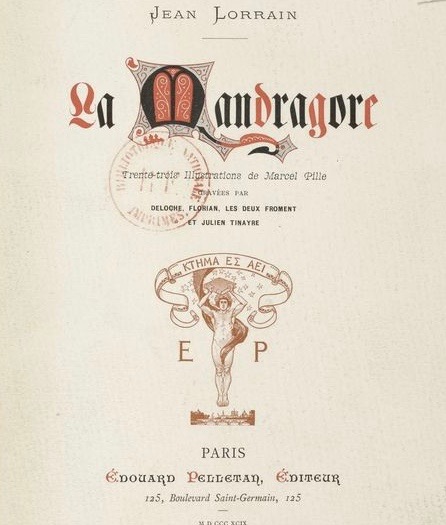 ‘The Mandrake’, my translation of ‘La Mandragore’ by Jean Lorrain – about a princess who gives birth to a frog – has just been published in a new literary journal, Belmont Story Review. I missed its appearance in May in this first issue, and discovered it one afternoon this past week when searching randomly online. A delightful surprise!

Jean Lorrain was a French author of the Belle Époque who wrote fantastical stories and novels that were original but often bizarre. He was loathed for the caustic humour of his newspaper columns in which he attacked many of the leading figures of his era. Yet, while his perversions repelled readers, this participant in Belle Époque decadence was also a spectator who wrote sarcastic analyses of its morals: many of his stories encourage questions about prejudices, leaving a reader unmasked and uneasy. Lorrain was particularly renowned for his flamboyant homosexuality and an addiction to ether. No surprise, then, that he died quite young, at 51, in Paris. Today much of his work remains unread, even by the French.

I’ve translated a number of Lorrain’s short stories, with a few published in literary journals. Last year I decided to translate ‘La Mandragore’ (1899), a dark fairy tale brilliantly illustrated by Marcel Pille and available online in the original French edition at Gallica. I submitted my work to a few journals and this year was fortunate to have it accepted. When you’ve read the translation available in print from Amazon or for free on the site of the digital publisher, Issuu, I highly recommend you check out Gallica, where you’ll see amazing illustrations like the one below which will give you clues to the story about a Queen and her frog daughter. Oh, and of course there’s a mandrake, the plant with an eerily human-shaped root… ‘La Mandragore’ has also been translated into Spanish by Alicia Mariño and Luis Alberto, and it looks to be a beautiful edition that includes the original illustrations.