Théodore de Banville. Prolific poet and writer, frequenter of the most anti-conformist Parisian circles. Proponent of ‘art for art’s sake’:

Banville was an enemy of realism and had nothing good to say about technology that produced smoke or steam. He was among a number of writers who scorned the introduction of electric lighting and mechanised production in factories, as well as the fad for stock markets and wealth-making. He believed that humans are better when they surround themselves with beautiful antiques and ancient masterpieces of art and literature than when they pursue capitalist, bourgeois progress.

Parisian by choice, not birth – he loved the city of Paris and said it is filled with the smiles of fairies – Banville came originally from the French region of Auvergne, further south. While still young he went to Paris and published his first volume of verse, Les Cariatides, at the age of 19. His best work was Odes Funambulesques (Tightrope Walking Odes, or, in Banville’s own words (translated), odes composed with the care, rigour and comic element of tightrope walking). By the age of 30 he was producing poetry, tales and reviews to the great praise of other men of letters, among them Victor Hugo. In his later life Banville wrote mostly colourful and comical prose about the elegant, artificial, unreal Parisian world.

More importantly for me and my search for fantastical French short stories, Banville was one of a few late 19th-century French writers to bring the genre of the fairy tale back into fashion. Very little of his prose has been translated into English, but I’ve got the ball rolling with my translation, “The Lydian”.

Scottish writer, Andrew Lang, translated some of Banville’s poetry at the end of the century, and later wrote about it:

Poetry so fresh seems to make us aware of some want which we had hardly recognised, but now are sensible of, at the moment we find it satisfied.

My own feelings, precisely. When I first read Banville’s tales of Parisian life in Contes féeriques, I was blown away by the observations he made about his fellow city dwellers and their hastiness, their jealousies, their yearning to electrify and mechanise and modernise life and their tendency to curl the lip at old simple pleasures like candlelight and artisans’ workshops.

Banville married Marie-Élisabeth Rochegrosse when she was 47 and he was 53, and he adopted her son Georges Rochegrosse who was inspired by his stepfather the poet, and became famous himself as an artist.

Two sculptures of Théodore de Banville ensure he will not be forgotten. One is a bust in the Jardin du Luxembourg in Paris. (I like the lyre resembling a face…)

The other, in his birthplace of Moulins, is based on the drawing of Banville by his stepson Georges Rochegrosse (top of this page). Note the dog, Zinzolin, in the drawing and in the sculpture… In March 1944 this statue mysteriously disappeared from the park. The occupying Germans had stolen it with the intention of melting it down for weaponry, but fortunately the war ended before they got around to it. The statue was restored to the park in April 1945.

Banville died at 68 in 1891 and is buried in Montparnasse Cemetery in Paris. 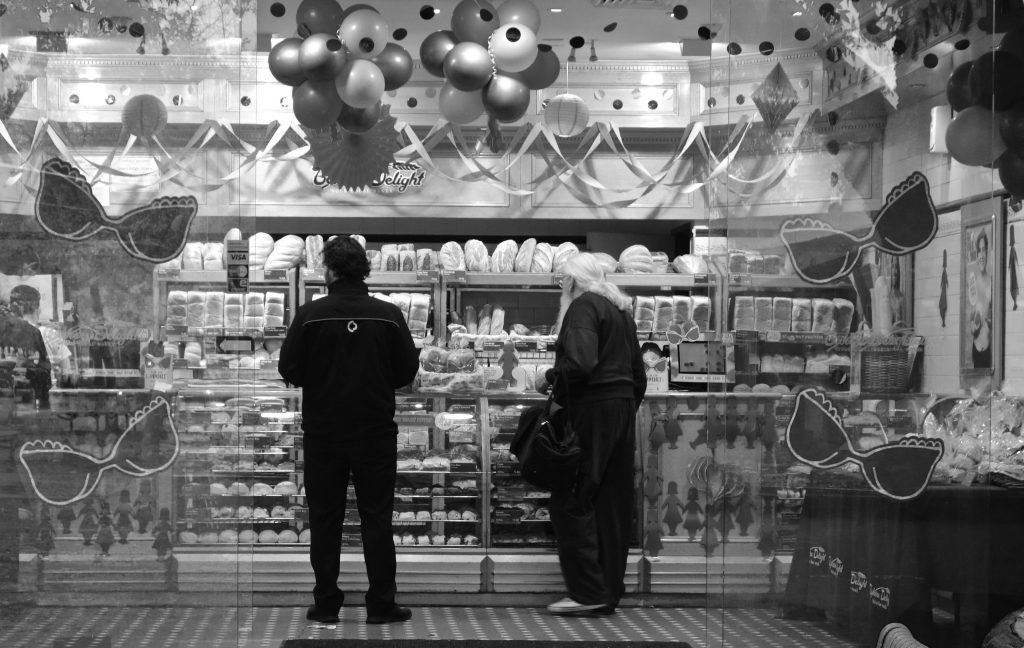 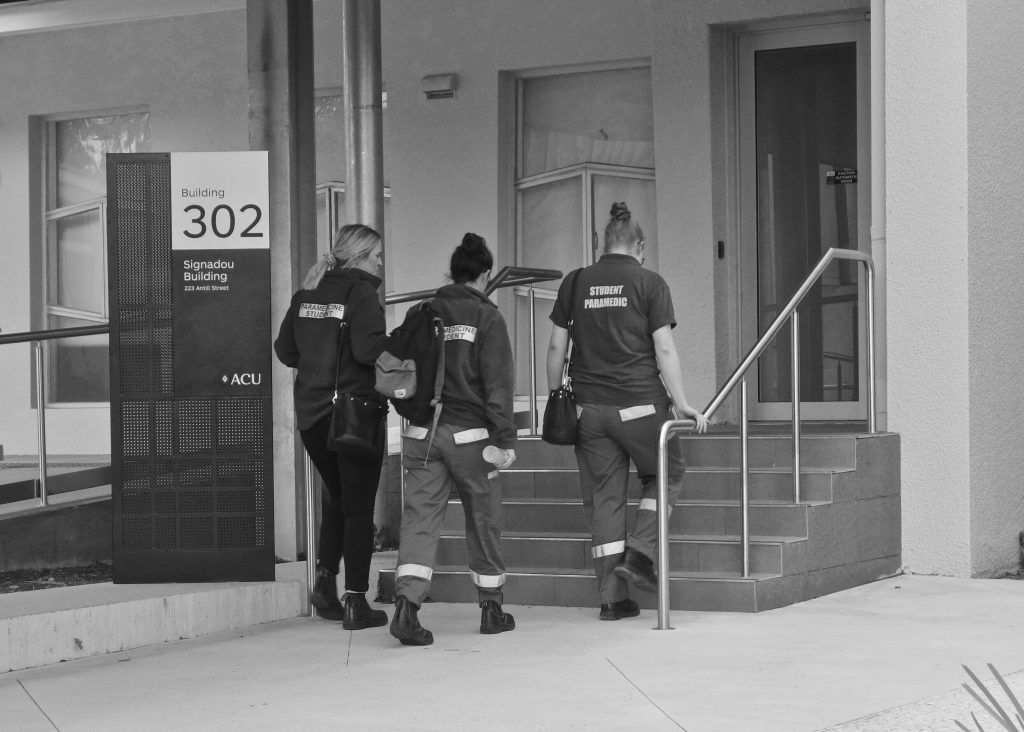 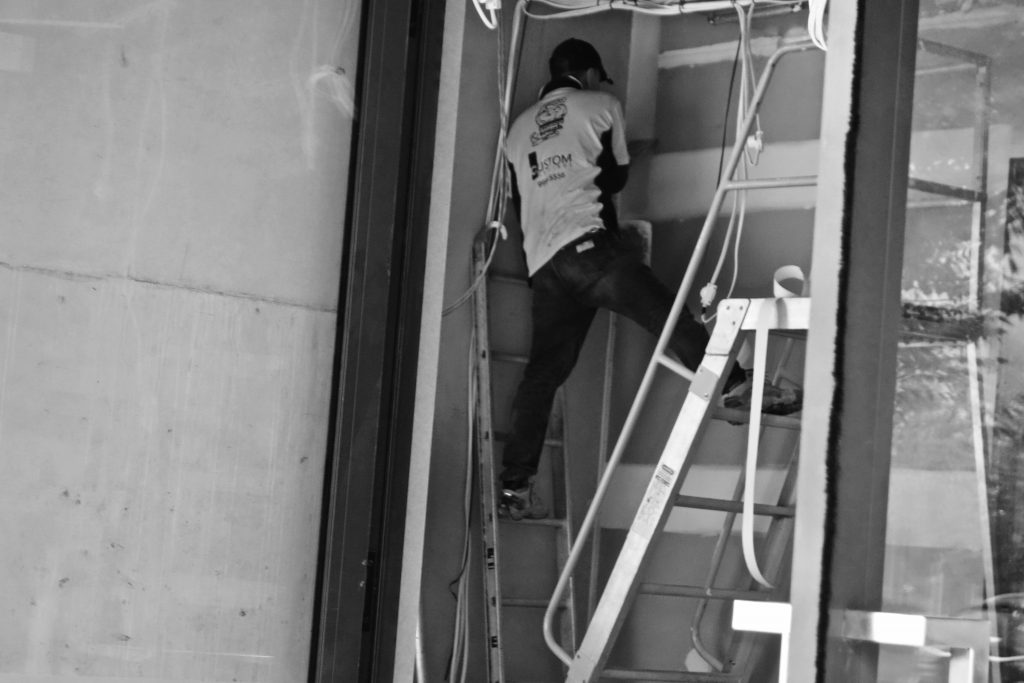 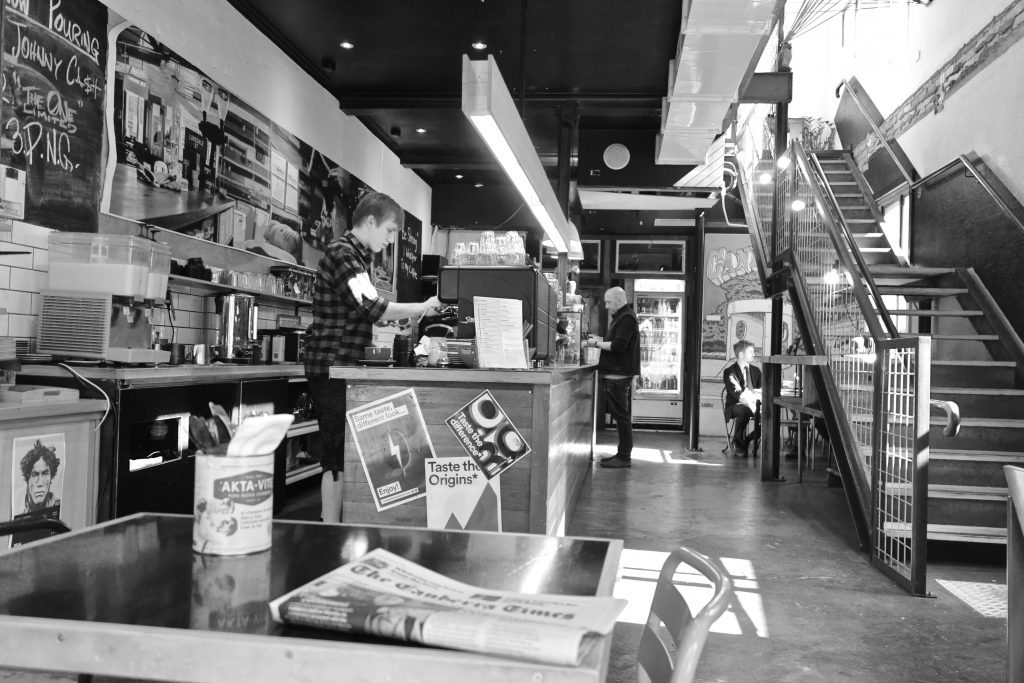 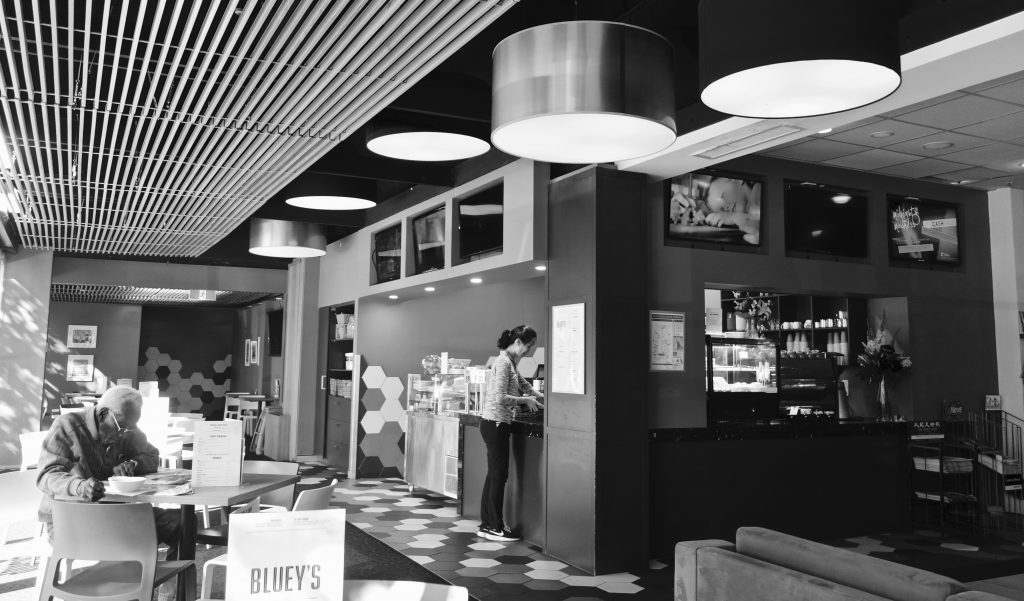 Time-filling.  And people watching. That’s what this is.

In Bluey’s café none of us has red hair.

It’s a mystery. How do we offer something on the internet that pleases more than a few odd readers? In January I joined a Facebook group interested in the golden age of illustration which sort of extends from the mid 1800s to the 1970s. Not only did I thoroughly enjoy the exquisite coloured drawings that people were posting, most of which came from long-forgotten books, but I also saw it as a group I could contribute to. Plenty of the French stories I’ve read in old journals and collections were illustrated and I knew where I could get my hands on them. So I thought I’d post a picture or two.

In the first few months of this year I posted three illustrations, and the reception ranged from 5 to 18 ‘likes’. This week, flicking through a book I’ve had for a few years, I lingered long over one of the full-page illustrations, thought it would suit the group’s interests, and posted it. I truly didn’t care if 5 or fewer people acknowledged it, because I knew those 5 would appreciate the image for its touching humour.

Completely blowing away my low expectations, the post has since attracted 622 ‘likes’, a large number of comments, and has been shared 240 times! (Updated Wednesday)

Even though the images I posted earlier were equally interesting, they didn’t tickle the fancy of viewers as this one has. There’s no way of knowing what will!

Here’s the image. It’s by Marcel Pille, illustrating a moment in ‘La Mandragore’ by Jean Lorrain, a story I’ve translated as ‘The Mandrake’, published in Belmont Review. Not that any of this mattered, since people gave their own interpretations of the image without any knowledge of the story. 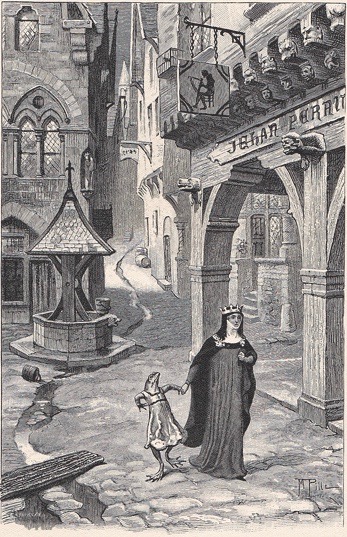 Some of the reactions were emotional, some humorous, some surprised. So, here, I guess is the answer to my own question: how do I attract the interest of internetters? With something, preferably an image, that evokes emotion, humour and surprise, all at once! 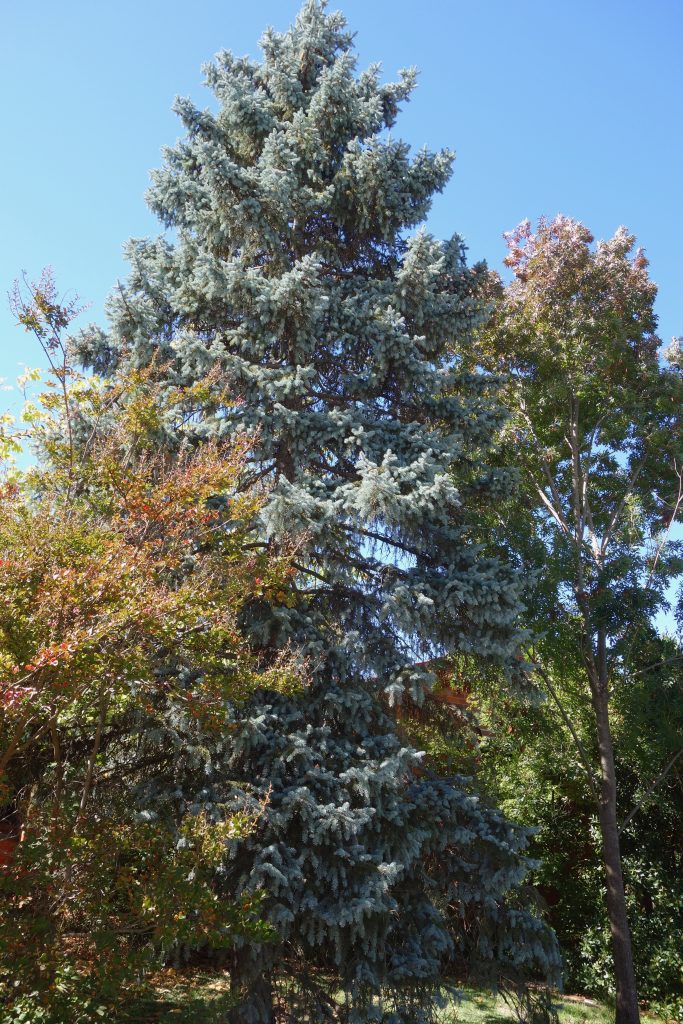 From time to time a fairy ring grows beneath my Spruce fir tree. At the moment it’s not a whole circle but more of a semi-circular meandering of mushrooms across the lawn. It’s been growing for about a week and must be following a long root of this tall tree. 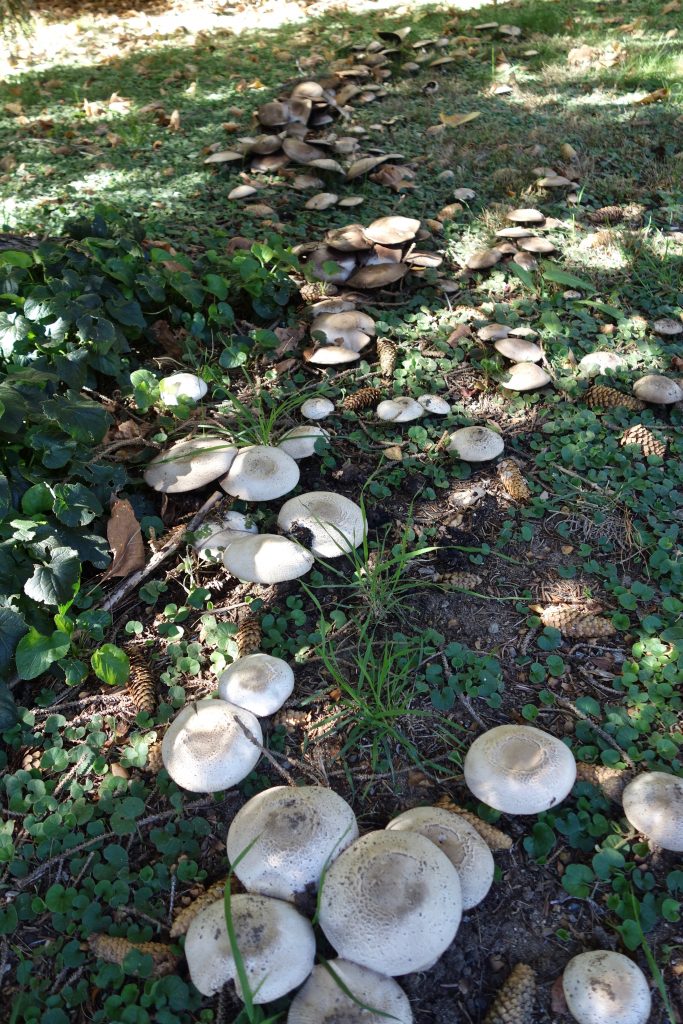 On Sunday I noticed one particular mushroom coming up in the nearby garden about five metres from the beginning of the line. It’s like a pop-up house for little people, and evokes Faerie, that land of enchantments and enchanted beings.

It’s expanding as it ages, yet the leaf-litter roof is still in place.

The small shelter over the mushroom makes it easy to understand why children could believe there are tiny fairy-folk residing within.

But recently I learnt that not only children have believed in fairies! Writers of Faerie in the 19th century (about 90% of whom were men) expressed a fearful respect for the little winged women, often passing a mention in their tales that fairy love was fatal to men. Male authors were wary of a fairy for she could transform or disguise herself. Small as she was, she could be mistaken for an insect or a bird, she could even become invisible, and, most dangerously, she could turn herself into a real woman. But the rule was that no man could love her and live.

I’ve read a lot of French fairy tales and have found it to be true. In Théodore de Banville’s story “La Chiffonnière”, for example, a fairy becomes an old ragpicker who is almost trampled by horses, but a kind-hearted poet picks her up where she falls, and in his arms she is rejuvenated, now young and beautiful. Though she wants to give him her love as a reward for saving her life, she knows it would kill him. Instead she offers him the finest cigar in the world, and four wishes.

Fairy rings are also things to beware of, to tread carefully around and not through. Men who entered the ring often disappeared and those who were tempted needed to be rescued. It seems the ancient curse has exhausted its power, for I’ve often stepped into mushroom rings in my lawn but have never disappeared…

While I know these fairies are not really magical, I also know that, in my garden, suddenly emerging fungi certainly are.