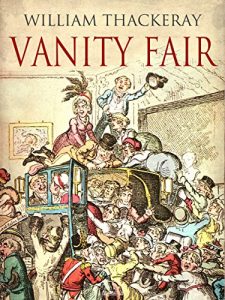 Booksaremyfavouriteandbest invites us each month to find six degrees of separation between books. November’s starting point is Vanity Fair by Thackeray.

1.  I haven’t read Vanity Fair but the name of William Makepeace Thackeray immediately brought George Sand’s Spiridion to mind because Thackeray said, in relation to her novel Spiridion (that I translated), that she was “the most elegant writer, I think, that her sex ever produced.”

2. Thinking of Spiridion leads me to Cœurs russes (Russian Hearts) by Eugène-Melchior de Vogüé which I’ve also translated. It’s a book of short stories written by a French ambassador to Russia in the 1880s, set in Russia and written in the style of Turgenev and Tolstoy.

3. Now I’m remembering the pleasure of reading A Sportsman’s Sketches by Ivan Turgenev, especially the short story ‘The Tryst‘.

4. I’ve used ‘The Tryst’ several times when tutoring migrants in English because of its delicious descriptions. One student who enjoyed it has now asked for us to read Picnic at Hanging Rock together. I can’t believe my luck, I love this book.

5. Of course the images in my head now are from the movie of the same name, where floaty, pure, muslin-robed girls wander over forbidding boulders, as though returning to their fairy homes. This triggers a memory of Théodore de Banville’s story ‘L’Enfant bossue’ (The Hunchback Girl) in Contes féeriques (Tales of Faerie) about a convent girl who wants to return to her fairy parents.

6. I’ve got fairies on the brain, having translated a great number of French fairy tales in the last few years and read several illustrated books of Grimm’s Fairy Tales.

Four of these six books are collections of short stories, which says something about my translating life: stories are more likely to be accepted by publishers than novels. But they’ve made me love 19th-century literature even more.